(Rock Hill, S.C) – The Mural Mile initiative looks to provide funds and opportunities for local artists to create public murals around downtown Rock Hill, which organizers say they hope will improve the quality of life in the city.

Artists both locally and internationally known have come to work on the project. Osiris Rain, who was classically trained in Italy and Norway and is the founder of Osiris Rain Studios and the North Carolina Academy of Art, was the first to complete a mural for the project.

Before painting murals, he was a scenic painter for the film industry, but after his film company moved, he decided he wanted to do something a little different.

“When I was a scenic (painter), that was the first time I had painted murals and the visceral experience of being able to paint, but also be outdoors, also interact with the public, is just far more gratifying than sitting in a dark room in front of an easel. So it was an easy choice for me,” Rain said.

While some artists have had to apply to be a part of the project, Rain was contacted by the Economic Development Corporation because of his previous work.

“Originally, Shepard Fairey was going to be doing the first one. He had to cancel…so I got to swoop in and steal his thunder. Only because I was a local and I didn’t have to travel from (Los Angeles),” Rain said. “They saw a piece I did up here in Charlotte, in the NoDa Arts District, and they really liked the general vibe of that. So I designed one specifically for Rock Hill.”

Rain’s mural, “Warehouses on White,” was completed in April 2020 and is located at the Dust Off Brewing Co.

Other community members also had a hand in the creation of murals, like Brittney Kelly, owner of The Mercantile, who lead the change on the “No Room for Racism” road mural outside her store. The mural depicts the Friendship Nine, civil rights pioneers who were jailed in Rock Hill.

“You know, after sitting down and speaking with a neighbor who is a dentist here in town, but she happens to be an incredible artist…the Friendship Nine came into our head.” Kelly said. “And it was more, for us…about the education component. That I just truly think there are so many people who live in this town that know nothing about the sit in at the counter or that John Lewis came through here and was beaten at our bus stop here.”

Kelly said, despite approval for the mural from the city, they still encountered a lot of bureaucratic issues.

“We were the first to do a road mural in the city of Rock Hill. So, it just kind of threw everybody for a tailspin as far as the ordinances and the planning and zoning,” Kelly said. “At first, they were completely okay with us crossing the lines. And then they day we are painting, we got kind of like a cease and desist not to cross the yellow line. But it was already approved and kind of on the paperwork, so we just continued forward with it.”

The next mural going up will be by Shepard Fairey, who will be in Rock Hill Oct. 15-19. A reception is planned to take place on Oct. 16.

Knowledge Park, the plan under which the Mural Mile falls, is “a walkable, multi-faceted district of Rock Hill that will build a modern economy, and reinvent the original heart of Rock Hill,” according to the Knowledge Park website.

Cathy Murphy, downtown development manager at the Economic Development Corporation, said the Mural Mile was a part of Knowledge Park’s plan to “placemake.”

“A plan came together to bring residents and interested parties to put together a strategy for downtown development in Rock Hill, and that’s where the Knowledge Park Action Plan came from,” Murphy said. “There were nine strategic areas that came out of that…one of them was jobs and employment, one of them was development and one of them was placemaking.”

Placemaking, as defined by the Public Square, a journal by the Congress for the New Urbanism, in an article titled “Four Types of Placemaking,” is “ the process of creating quality places that people want to live, work, play and learn in.” 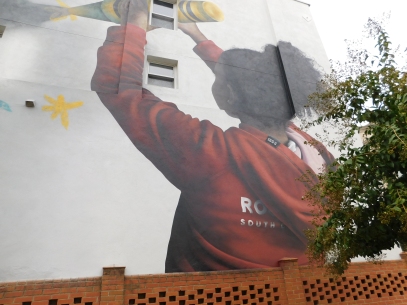 Darion Fleming, who has worked with organizations such as Bank of America and NASCAR, created “Dreamer” as a part of the Mural Mile. “Dreamer” is located at Overhead Station at 212 E. Main St. in Rock Hill (photo: Christian Smith). 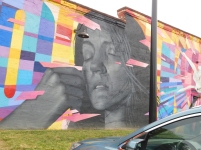 A previously blank wall outside of the Dust Off Brewing Co., at 130 W. White St. in Rock Hill, is now adorned with the work of Osiris Rain, an internationally recognized street artist, who was commissioned for the Rock Hill Mural Mile (photo: Christian Smith). 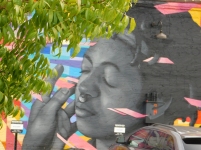 Osiris Rain brings his expressive art style to Rock Hill for his piece created for the Mural Mile. The mural is located at the Dust Off Brewing Co. at 130 W. White St. in Rock Hill (photo: Christian Smith). 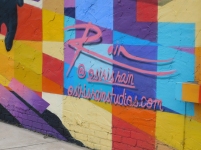 Osiris Rain, founder of Osiris Rain Studios and the North Carolina Academy of Art, was the first artist to create a mural for the Rock Hill Mural Mile. His mural is located on the side of the Dust Off Brewing Co. at 130 W. White St. in Rock Hill (photo: Christian Smith). 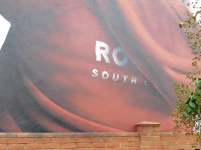 Darion Fleming’s contribution to the Mural Mile titled “Dreamer” is detailed down to the light folds of the sweatshirt. “Dreamer” is located at Overhead Station at 212 E. Main St. in Rock Hill (photo: Christian Smith). 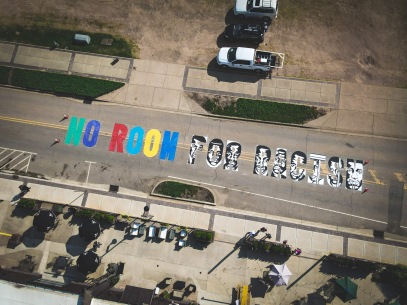 “No Room For Racism,” a Rock Hill Mural Mile road mural, features prominently the members of Friendship Nine, a group of black men who went to jail for staging a sit-in at a segregated lunch counter in Rock Hill. The mural is located outside the Mercantile at 130 W. White St. in Rock Hill (photo: Courtesy of Aaron Longstreth, “The Rock Hill Drone Guy”). 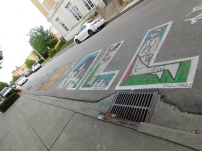 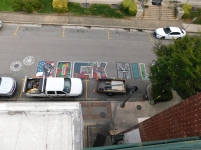 In September 2020, the Community Relations Council of Rock Hill held Race Equality Month, and decided to team up with a number of artists to create “Rock Hill for All,” which is on Caldwell Street adjacent to Amelie’s French Bakery at 157 E. Main St. in Rock Hill (photo: Christian Smith). 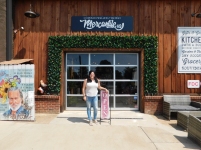 Brittany Kelly, owner of the Mercantile, helped to design, plan and fund the “No Room For Racism” mural on the road outside her store. The mural, part of the Rock Hill Mural Mile, was headed by local artist Heather Johnson (photo: Christian Smith).