Editor’s note: This story was filed at the end of September, prior to Regal’s announcement Oct. 5 that it would temporarily close all of its 536 theaters across the U.S., including those in South Carolina and North Carolina, which had just recently reopened.

Parent company Cineworld said, in a press release, the closings were necessary because movie studios are hesitant to release new film titles while theaters in major markets like New York remain closed.

(Rock Hill, S.C.) — The Regal Manchester movie theater in Rock Hill has reopened after shutting down in the spring due to the COVID-19 pandemic.

The Regal owned theater was one of 15 across South Carolina that reopened Aug. 28.

“The company, they were financially stable, but it was time for them to open up because if they didn’t, then they were afraid they couldn’t open up after,” said Tatyana Peshkov, a manager at Regal Manchester. “It takes a lot of money to open up a business again. They had to do it now or never.”

Customers can expect to see a number of changes to the moviegoing experience, due to the pandemic.

“Keeping your mask on, we can’t can give refills out no more. The viewers have to sit two seats apart at least from other parties. So, if it’s a group of four sitting they have to sit two (seats) away from anybody else that is watching,”said Nakia Williams, an employee at Regal Manchester.

“We close early now so we don’t stay open as late. We close at like 8 (p.m) now. (We’re) sanitizing very, very frequently, which is something we use to do, but now it’s a lot more critical to do it,” said Williams.

So far, Williams said she has noticed a changes in attendance.

“It’s been seven months since we been closed, I’m just excited and I’m ready for the atmosphere to pick back up because it’s been slow,” said Williams.

“We’ve been steadily getting more and more people come in. So we’re increasing our sanitation and all that stuff and keeping a 6-foot distance and all the protocols they have been giving us,” Peshkov said.

Rock Hill Resident Toni Cooper said she doesn’t plan to go to the movie theater until the pandemic is over.

“I am unsure about other people’s situation and how well they’re taking the pandemic, as far as keeping themselves social distancing and cleaning their hands, and I am just unsure about how the staff is going about cleaning the theater,” Cooper said.

Peshkov said they have seating arrangements for customers and they’re required to do theater checks.

“When we put customers in theaters for seating, we separate them by two seats and by different rows. So, if one customer sits in one seat and the two seats next to them are blocked off. So that no one can get sick and that we’re maintaining the 6-feet rule,” said Peshkov.

“We do theatre checks, so we run in and make sure that everyone is in their proper place and it’s really easy to see if someone is out of place, because they can’t be in a row in front of them or behind them.”

New releases that were playing at Regal Manchester included “Tenet,” “Unhinged,” “The New Mutant” and “Words on the Bathroom Wall.”

Regal Manchester employees said they hope to get new movies released in 2020 soon.

Bryan Jackson heads into a theatre at the Regal Manchester movie theatre in Rock Hill, S.C. to watch the film “Tenet” after the theatre reopened Aug. 28 after being closed for months due to the COVID-19 pandemic (photo: Jendaya Fleming).

There were just few cars in the Regal Manchester parking lot in Rock Hill, S.C. on a Thursday evening after the theater reopened Aug. 28, allowing people to watch movies and get the moviegoing experience (photo: Jendaya Fleming).

“Tenet,” “Unhinged,” “The New Mutants” and “Words on the Bathroom Wall” were some of the new release movies playing at Regal Manchester in Rock Hill, S.C. when it opened Aug. 28 (photo: Jendaya Fleming).

The Regal Manchester movie theatre in Rock Hill, S.C. has posted signs and hand sanitizer around and inside the theater to, in order to help prevent spread of the coronavirus (photo: Jendaya Fleming).

The Regal Manchester movie theatre in Rock Hill, S.C. has posted signs around and inside the theater to encourage patrons to practice social distancing, in order to help prevent spread of the coronavirus (photo: Jendaya Fleming).

Tatyana Peshkov, a manager at Regal Manchester, sprays disinfectant on all of the movie theater seats. Employees and managers now do this after customers have left the theater, due to new company guidelines as a result of the COVID-19 pandemic (photo: Jendaya Fleming). 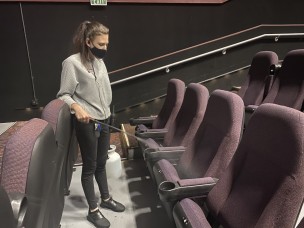 Tatyana Peshkov, a manager at Regal Manchester, sprays disinfectant on all of the movie theater seats. Employees and managers now do this after customers have left the theater, due to new company guidelines as a result of the COVID-19 pandemic (photo: Jendaya Fleming). 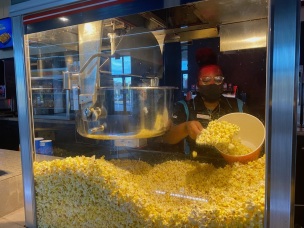 Nakia Williams, an employee at the Regal Manchester movie theater in Rock Hill, S.C., prepares popcorn for a customer. Popcorn, candy and drinks are the only concession snacks they are serving customers due to the COVID-19 pandemic (photo: Jendaya Fleming).